This blog post is adapted from a talk given by one of our group in February 2018, at a gathering organised by the Women’s Equality Party East Anglia division:

February 2017: and the elation and power that I had felt on The Women’s March London was fading. Everything and nothing had changed. Trump was in the White House. Britain was torn apart by Brexit. Populism was on the rise. And it felt like women were under attack across the world. What was I going to do now?

The answer came in a tweet from the organisers of the London march. Organise “a huddle.” Find local women who had attended the march, either in person or in spirit, and talk. Initially, I was sceptical. I had moved to Suffolk four years previously from London. To me, Suffolk felt half asleep. But I tried it. I shouted out via friends and social media. And I started to get responses.

There were about fifteen of us at the first meeting in our local pub. The first group felt a little bit like group therapy. We went round the table and each had a moment to introduce ourselves and say what was on our minds – what were we angry about. The reasons came tumbling out – Brexit, Trump, the NHS, everyday sexism, domestic violence, homelessness, austerity, the plight of refugees… there were so many reasons and so much anger.

I set up a Facebook page for the group after that first meeting. More women were invited to join. Our numbers swelled to thirty.

May 2017: A General election had been called. Myself and a number of other members were represented by MP Dr Daniel Poulter, who sat in a very safe Conservative seat with a majority of twenty thousand. Many of our members had been dismayed at his apathy towards crucial social issues and, most notably, issues that affected women. Poulter had voted with his party to retain the tampon tax and failed to attend a crucial debate on the Istanbul Convention – unforgivable when Suffolk has a worse than the national average occurrence of domestic and sexual violence against women. Poulter seemed unwilling to address any criticism – choosing to block most dissenters on social media rather than engage in a debate or defend his position. Most members of our group felt that he just simply didn’t feel like he needed to listen to us. We knew we were taking on the mountain but we felt that, for once, an alternative voice had to be heard and that maybe some people would start to question the status-quo.

We needed a name for our group. We landed on “The Suffolk League of Angry Women.” There was some doubt about the use of the word “angry”. Would it scare people? Would it mean people didn’t listen to us?  But for me – and the other founder members – this encapsulated us. We were angry. For so long, as women, we had been told that being angry is wrong, useless, not ladylike. We were told our anger was hysterical, unwarranted, unhelpful and told to “Calm down, dear.” Women’s anger was something to be ignored, laughed at and dismissed. But our anger wasn’t hysterical – it felt justified and it felt powerful. It felt good to name it, embrace it and harness it. The name also seemed to capture something of our spirit and our humour.

The Suffolk League of Angry Women printed and hand-delivered 2,700 leaflets detailing some aspects of Poulter’s voting record to houses in our local area. There was nothing that wasn’t fact on the leaflet. It simply invited voters to think twice. Dan Poulter was elected again but his majority fell by three thousand votes. 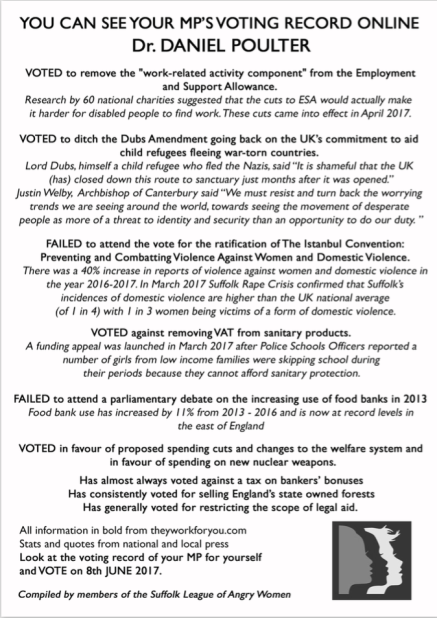 More women found us on Facebook. “I’m so happy I found you,” said one, “I thought it was just me.” Our group now has more than seventy members. Our members are mothers, grandmothers, teenagers and young women. Whilst the League is not affiliated to any one party, our members are party activists for The Women’s Equality Party, The Labour Party, the Liberal Democrats and the Greens. Our members run local refugee charities, they volunteer at homeless shelters, run green initiatives and organise fundraisers. They blog and they campaign. The Facebook page is a place to share news stories, petitions, ideas, thoughts and frustrations. Our meetings continue to provide a space for members to find some catharsis and solidarity. Last Autumn we started raising money for The Lighthouse charity for domestic violence victims in Ipswich, through sales of our badges and t-shirts. At our Christmas meet-up we organised a collection of toiletries for Friends of Suffolk Refugees. We’re in the process of organising another fundraiser this Spring.

SPEECH GIVEN BY C.G.

View all posts by suffolkangrywomen